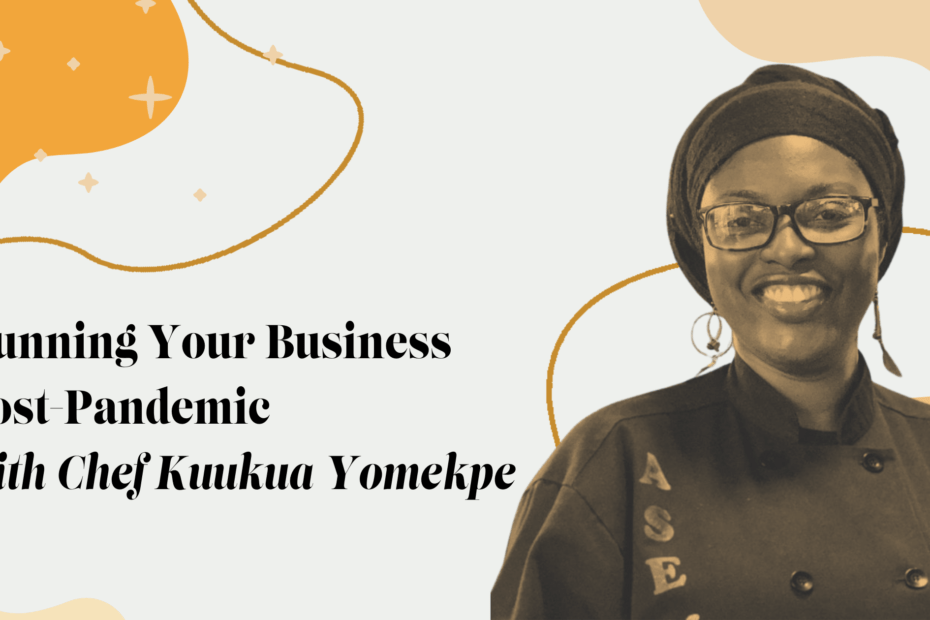 Our founder Kiana sits down with Chef Kuukua Yomekpe of Asempke Kitchen to talk running your own business, adapting after the pandemic, and creating opportunities for non-English speakers and BIPOC in the hospitality industry.

Chef Kuukua Yomekpe: Actually, I haven’t worked in the industry except for myself. I’ve been cooking formally since 2001, after grad school, when I couldn’t find a job.

I’ve been, I guess, lucky or blessed. I’m not sure. It does disadvantage me to a certain point because there are things I don’t know. There is no formal training that actually focuses on training chefs of color. Everybody would like you to go through the culinary schools, which are very Eurocentric in their focus, as far as the cuisine. And so, for me, [culinary school is] not an important piece of cooking. I feel like I know what I’m doing. My clients, my friends, my family, everybody loves the food. So I don’t feel the need to have to prove anything to anyone.

I guess it’s a privilege in a way, because I have a full time job as an academic at a college. Throughout my career, I’ve always either had that or have chosen to run [Asempe Kitchen] full time. So to an extent, I’ve controlled my own environment.

Kiana: A lot of culinary schools are actually closing up shop, because of the limited offerings. There is lack of a focus on a curriculum for people of color, for African diaspora foods in the kitchen.

I would love to know, for someone who has been operating solely, how do you how are you expanding your audience?

Chef Kuukua: It has taken some work,it’s still ongoing. Most of it has been Facebook, Instagram. Most of the other avenues are word of mouth. I also have a disability, so I have to balance out how much effort I put into getting really big versus controlling [the business’ growth] so that I’m still able to be one on one with my customers. I want that intimate experience, being able to come in and talk about the food, talk about myself and maybe ask you to talk about yourself. It’s more of a relationship building. That is more important to me than actually expanding and becoming like a big restaurant, you know?

Kiana: As for someone who has a full time job, and is still operating their own business in the last 12 months, how has your world changed?

Chef Kuukua: Well, basically, we set out in February last year. We were getting ready to have our first farmers market on May 9th. We couldn’t even do a cooking class because people didn’t want to be in each other’s faces. Because the business is so focused on personal interaction, it didn’t make sense to do the internet, because I just didn’t feel comfortable.

This year, March and April have been the busy while we’re getting ready for the farmers market again. I’m going to do this, I’m going to try this again. I spent the last 12 months really doing nothing, you know, just talking to friends. You know, eating out because I wanted to support my friends who were doing ethnic food and didn’t have any business. So, it’s exciting [to be back at the farmer’s market]. It’s also scary because I’m not actually qualifying for any of the PPP loans. I’m coming out of pocket for everything I’m doing. So it’s a little tricky, it’s expensive.

I’m just going to try it out for this year and see what it looks like. I might or might not become a virtual cooking class chef and leave the more physical labor behind.

Kiana: How has managing that stress impacted you?

Chef Kuukua: It’s been really challenging. I have the privilege and gift of having a really supportive partner. So, in the first few months of the pandemic, we sheltered in place together. I had a lot of support in managing the day to day.

Summer came around, and the pandemic news changed so we were able to do a lot of stuff outside, like go to the beach. I’m still taking precautions, still have our masks on, but we were able to do outside stuff. That usually helps my energy level and my ability to function better because I’m in sunshine and light. Winter was hard. But once again, you know, I had my partner, so I’ve been managing really well.

Kiana: As someone who is so self sustaining with limited time, what are some ways that the restaurant industry could do to improve recruitment? Do you think job board platforms with video resume formats could spotlight your skills and cut down on time spent applying for positions?

I have no qualms with that option, I’m pretty personable. I’m not camera shy. I have two masters degrees, I’m a critical thinker. I don’t have a hard time expressing myself, which I think, has also been a positive for me.

Most of my immigrant friends, English is not their first language. There’s always that barrier between themselves and the customer that they have to cross, whereas I have very little barriers between myself and them.

Kiana: That is a really interesting point to bring up. That is one of the largest challenges of being being a chef of color. What are some things that we can do in this industry to realistically help these chefs flourish?

Chef Kuukua: You know, that is very hard to add to because I feel as though I lucked out. Ghana was a British colony, so I spoke English from the start. I didn’t even know I had an accent, [people I spoke to] were still able to decipher what I was saying. [My accent] wasn’t something that was prohibitive.

I know that English has its challenges like imperialism and colonialism and language superiority. There’s so much. But also, I think it’s easier to have [English language skills] than not to have it because you’re able to bridge certain gaps that you wouldn’t otherwise. I’m definitely encouraging immigrant folks to get enrolled in classes or have conversation partners. I think the goal is to strive for language proficiency.

I got lucky, because I can do a lot of my own editing on my website. I worked with someone to design my logo, but I wrote all my scripts. I’ve availed myself to others who wanted to start [their career]. But it’s not an easy process. I know that I have, I have a bit of an upper hand because I was trained classically within the US higher education system. I have access that most people most immigrants coming off the plane don’t have, you know?

Kiana: Absolutely. It’s part of the game of where opportunities land and how they land. It’s a struggle for any of us to get our foot in the door.

Chef Kuukua: Yeah, I think it also depends on how far up you want to go. If you came to the US with a dream of wanting to be an executive chef, then going to culinary school is probably the best path to achieve that.

If you came thinking ‘I want to cook my food and want to give the Americans a chance to taste the food as it is, not Americanized’, then you have to set your own metrics of success. If cooking at home and feeding a cross section of the small town you’re in is all you want, then go for it.

But if you want to advance, if you want to be running a country club or something, then your goals have to be set a little differently. You have to buy into the system to be able to rise up, right? No one’s gonna recommend you to be executive chef, if you don’t have a degree. Maybe if you know people, right? Sometimes a basic degree works. Just knowing that this person was trained classically within the higher education system, gives them a path into getting their foot in the door. It may be a position that you know nothing about, but you have a degree, so they’re willing to teach you. But if you don’t have that sort of first step access, it’s harder to break into those spaces.

Kiana: What can we do to help those without the culinary degree? How can we help them build a network, build references?

Chef Kuukua: Right? That’s a that’s a good goal, because I think the majority of folks, chefs who make ethnic cuisine, are in that batch of people. They don’t have the degree. They’re either not having enough language access. They might not be interested in what is being taught because they really want to cook their own cuisine, which is not being covered. Right? So it’s the people in the middle. Really, it’s the people in the middle who want that. They’re not striving for the James Beard, they’re not a just want to share their level of their cuisine.

Feeling wanderlust after a year indoors? Travel the world with Aisle Mine! Book a LIVE virtual cooking class today.